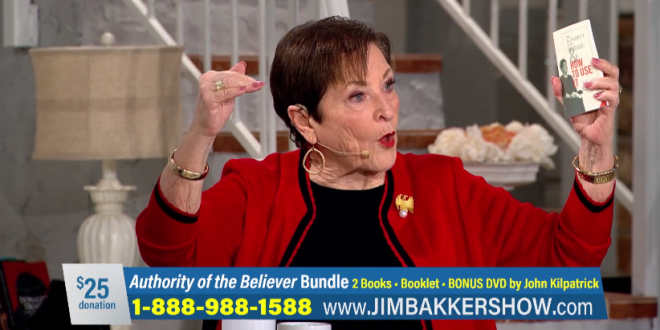 Televangelist: I Sat In The Senate Gallery And Took “Authority” Over The Anti-Kavanaugh Demons [VIDEO]

“We were the guests of Sen. Grassley and Sen. McConnell. We went in the back door and they gave us secret little passes and all this. They put us in a holding room and both of those senators came out and Sen. Grassley said to us just before he left the room, he said, ‘Now, I believe in the power of prayer.’ He said, ‘I know there are a lot of you in this room that do to.’ He said, ‘Don’t pay a lot of attention to what’s going on the floor, you keep your voices lifted to heaven.’

“Now that is someone in authority giving us authority to pray. They were the two senators most active in this whole thing—Grassley and McConnell—they’re the two that had the authority, I would say, and they passed it over to us.

“And oh my goodness, we’re sitting up there and I had my little hankie, looking down at the senators and my mouth is moving; I’m taking authority, I’m telling that devil what he can’t do. I’m taking authority over those demons because the young people down there, and the leaders, were definitely affected by demons.” – Televangelist Billye Brim, speaking on Jim Bakker’s slop buckets show.