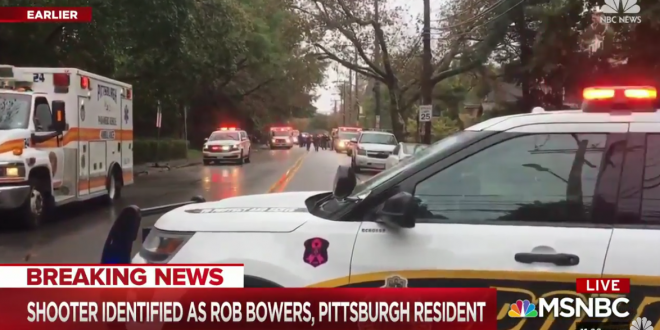 The suspected shooter was identified as Robert Bowers, 48, law enforcement sources told CBS News and KDKA. Bowers surrendered and was taken into custody.

Bowers burst into the Tree of Life synagogue and indiscriminately fired in the building while shouting, “All Jews must die,” police sources told KDKA. Four officers were shot during the incident, officials said. Their injuries are believed to be non-life-threatening.

Bowers was armed with a possible AK 47 and two pistols and had barricaded himself in a room at the synagogue, a law enforcement source told CBS News.

Bowers was an active poster on the “alt-right” version of Twitter, Gab. Bowers went by the moniker One Dingo on the site. In his bio section, Bowers wrote, “jews are the children of satan. (john 8:44) — —- the lord jesus christ is come in the flesh.” Shortly after the shooting at the Tree of Life Congregation, Bowers’ Gab account was deleted.

In a post a few days before the shooting, Bowers wrote, “Trump is a globalist, not a nationalist. There is no #MAGA as long as there is a kike infestation. #Qanon is here to get patriots that were against martial law in the 90’s to be ones begging for it now to drain muh swamp. But go ahead and keep saying you are #Winning.”

The Pittsburgh Tree of Life Synagogue shooter Robert Bowers was a Trump hating Nazi that frequently posted his hatred for Jews and Trump.

Here are some of his last posts from his social media before it was scrubbed from the internet. pic.twitter.com/JNV6BtrxL3

The Trumpbots are out here saying that the Squirrel Hill, Pittsburgh Tree of Life Synagogue suspect, Robert Bowers, isn’t a Trump supporter. And they’re right.
He didn’t like Trump BECAUSE TRUMP WASN’T ENOUGH OF A NAZI FOR HIM. He didn’t want to kill enough Jews. #saturdaymorning pic.twitter.com/q0rtYY74AT

Social media accounts suggest shooting suspect Robert Bowers was a neo-Nazi/white nationalist who loathed Jews, migrants and refugees. He also said he strongly disliked Trump because he thought Trump was too soft on Jews.