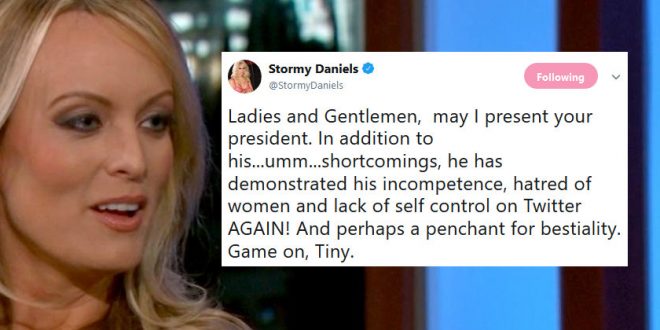 Stormy Daniels Hits Back At Trump: “Game On, Tiny”

Daniels mocked Trump by referencing his “umm…shortcomings,” and joked that he “perhaps” has a “penchant for bestiality.” Trump has privately attacked Daniels’ appearance and in recent weeks has been wanting to fire back at her for “mocking his manhood” in her book, The New York Times‘ Maggie Haberman reports. Now, Trump has done just that, and it sounds like Daniels welcomes this escalating war of words. “Game on, Tiny,” she wrote.

Ladies and Gentlemen, may I present your president. In addition to his…umm…shortcomings, he has demonstrated his incompetence, hatred of women and lack of self control on Twitter AGAIN! And perhaps a penchant for bestiality. Game on, Tiny. https://t.co/6DpDD5ELtj