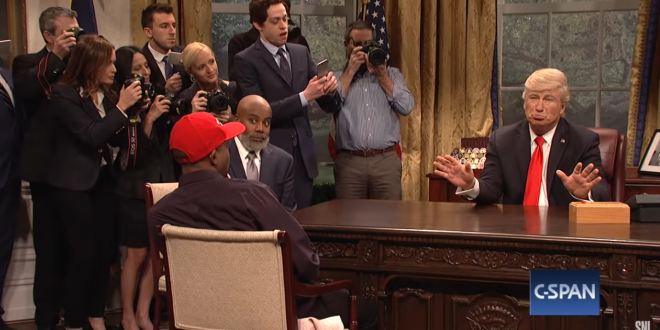 “Oh, this guy might be cuckoo,” the president said to himself in voiceover. “I was in a room with Dennis Rodman and Kim Jong-un and they made a lot more sense than him. This guy makes Brett Kavanaugh seem cool and collected.”

After Redd’s West bragged of being a “stable genius,” it dawned on the president: “Oh my god, he’s black me.”

“So in conclusion, 13th Amendment, Chi-Raq, trap doors lead to the Unabomber, male energy, Trump is my dad, Hillary’s a woman and the media needs to start making this President look good,” Redd’s West said wrapping up his speech. He then hugged Baldwin’s Trump calling him “dad.”

“I love you Kanye,” Baldwin’s Trump responded. “We have a lot more in common than people know. We’re both geniuses, we’re both married to beautiful women and we both definitely have been recorded saying the ‘n-word.'”