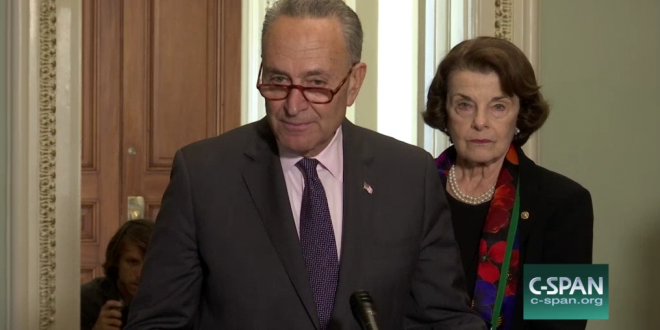 Well, this is totally unsurprising.

Democratic leaders in the Senate called the FBI’s report on Brett Kavanaugh a “limited investigation,” noting that the bureau failed to interview both Kavanaugh and Dr. Christine Blasey Ford. “The investigation was very limited,” Sen. Dianne Feinstein said.

“I disagree with Sen. Grassley’s statement that there was no hint of misconduct,” Senate Majority Leader Chuck Schumer said. Senate Democrats also called for the FBI report to be made public.

The White House and Senate Judiciary Chairman Chuck Grassley, R-Iowa, said the additional interviews from the FBI show no corroboration of the allegations against Kavanaugh.

Senate Minority Leader Chuck Schumer on the FBI report about sexual misconduct allegations against Brett Kavanaugh: “I disagree with Senator Grassley’s statement that there was ‘no hint of misconduct'” https://t.co/N0PbO7vNhS pic.twitter.com/Nf4gXjAHJN

.@SenSchumer: “We have many fears that this was a very limited process, that would constrain the FBI from getting all the facts.” pic.twitter.com/O29Sf6fX3g