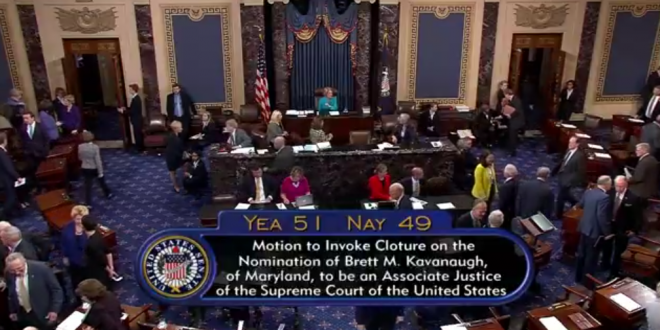 Supreme Court nominee Brett Kavanaugh survived a critical procedural vote in the Senate on Friday with help from Sens. Jeff Flake, R-Ariz., and Susan Collins, R-Maine, but his fate was still unclear as Collins said she would reveal at 3 p.m. whether she can support Kavanaugh in a final vote that’s expected in the coming days.

The Senate voted 51-49 to end debate on the nominee, setting up a final vote on the nominee. But the vote came with surprises — Sen. Lisa Murkowski, R-Alaska, voted against Kavanaugh, but she was offset by Sen. Joe Manchin, D-W.Va., who voted with Republicans.

The nomination is still on a knife’s edge, given that Collins’ final position is still not known, and Flake showed last week has has the potential to be flipped at the last minute.

Friday’s vote ushers in 30 hours of debate before the Senate takes its final vote on Judge Kavanaugh. It came as senators were still absorbing the results of a confidential F.B.I. inquiry into allegations of sexual assault against Judge Kavanaugh, allegations that have torn apart the Senate and divided the nation.

In divergent and often bitter remarks before the vote, senior senators delivered closing arguments Friday morning that demonstrated how deeply the nomination has split the Senate.

Senator Charles E. Grassley of Iowa, the Judiciary Committee chairman, accused Democrats of waging a scorched-earth campaign to destroy Judge Kavanaugh — “the most qualified nominee in our nation’s history” — before he could be confirmed.

Very proud of the U.S. Senate for voting “YES” to advance the nomination of Judge Brett Kavanaugh!