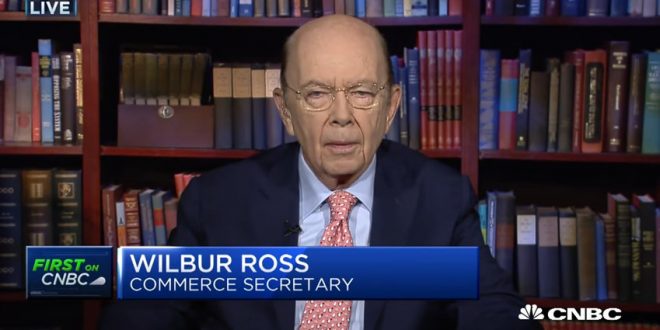 The Supreme Court is siding with the Trump administration to block the questioning of Commerce Secretary Wilbur Ross about his decision to add a citizenship question to the 2020 census.

The unsigned order Monday overrides lower federal courts in New York that would have allowed the questioning of Ross to proceed in lawsuits challenging the addition of a citizenship question on the decennial census for the first time since 1950.

The suits by a dozen states and big cities, among others, say the citizenship question will discourage immigrants from participating, diluting political representation and federal dollars for states that tend to vote Democratic.

The court’s action makes it unlikely that Ross will have to give a deposition in the case but allows the suit to go forward, at least temporarily. The court said it would entertain other objections from the government before the trial, which is scheduled to start in New York on Nov. 5.

The unsigned order seemed like an attempt by the court to avoid a 5-to-4 split in its first politically significant action since the addition of new Justice Brett M. Kavanaugh.

While the court for now blocked the deposition of Ross — it is clear there was at least a majority for that — it allowed the states to depose acting assistant attorney general John Gore. There were noted dissents to the order only from Justices Neil M. Gorsuch and Clarence Thomas, who said the distinction the court drew did not make sense.

The advocacy groups said Mr. Ross’s testimony was needed in light of his “shifting and inaccurate explanations” for the change. He initially said that he had acted in response to a December 2017 request from the Justice Department and that he had not consulted with the White House.

Later, Mr. Ross acknowledged that he had been exploring the idea long before receiving a letter from the Justice Department and that he had discussed the issue with Stephen K. Bannon, then President Trump’s chief strategist, in spring 2017.

Those discrepancies “have placed the credibility of Secretary Ross squarely at issue,” Judge Jesse M. Furman of the Federal District Court in Manhattan wrote in ordering the deposition to go forward.

Gorsuch (joined by Thomas) is already running interference for the Trump administration, defending its effort to place a citizenship question on the 2020 census. https://t.co/5HN6bBU71g pic.twitter.com/Rx1LF3JvmX

Hard to read Neil Gorsuch’s condescending reference to some of the plaintiffs as “interest groups” and not think of Brett Kavanaugh.

The whole opinion is dripping with condescension. https://t.co/5wlBmoOoMN

Previous CHATTER AWAY: Overnight Open Thread
Next REPORT: Secret Service Had To Break Up February Fight Between Corey Lewandowski And John Kelly