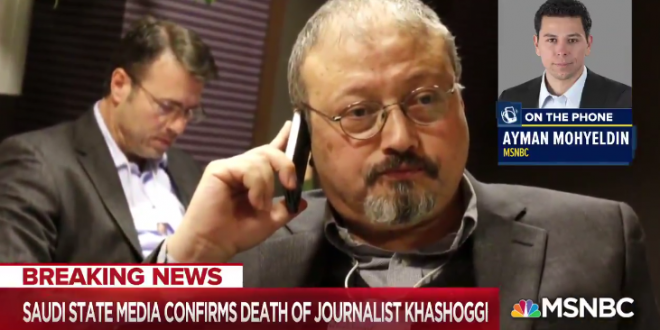 Saudi Arabia has said the journalist Jamal Khashoggi, who disappeared after visiting the country’s consulate in Istanbul on 2 October, is dead. The news, which cited preliminary findings from an official investigation, was announced on state television on Friday. It said a fight broke out between Khashoggi and people who met him in the consulate, leading to the death of the reporter.

Eighteen Saudis have been arrested and are being investigated in connection with the case, according to a statement released through state-run media. None were identified. In the statement, the kingdom’s public prosecutor said that an investigation had found that an argument broke out between Mr. Khashoggi and men who met him inside the Saudi Consulate in Istanbul on Oct. 2, leading to “a fistfight that led to his death.”

18 individuals are under investigation and 2 individuals have been dismissed from govt. General Ahmed Al Assiri and Saud al-Qahtani @AymanM reports on #TheBeat pic.twitter.com/SrfWezkS0M