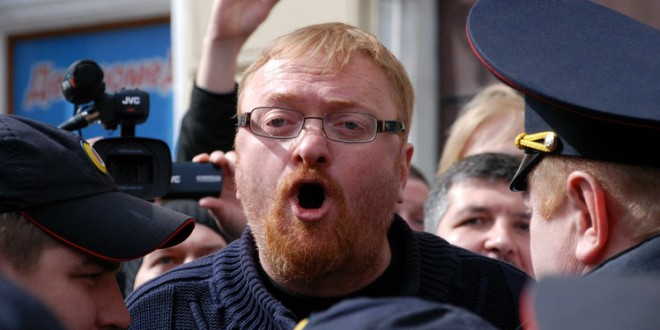 State Duma deputy and notorious anti-gay crusader Vitaly Milonov reportedly attempted to shut down Russia’s only LGBT film festival on its opening night. The St. Petersburg-based Fontanka news website reported that the deputy, accompanied by six men, physically blocked the entrance to the “Side by Side” film festival.

In footage posted online, the lawmaker is heard accusing festival-goers trying to get into the venue of participating in an unsanctioned demonstration. “Dear citizens, you know yourselves that you are perverts; you need to disperse,” he is heard saying. “We are Russian people who are on our home soil. And you’re not. Your motherland is Sodom and Gomorrah,” he adds.

Festival organizers claim Milonov told the police that a “hostage crisis” was unfolding in the theater, forcing the 400 attendees to evacuate the building. The opening night’s film was then canceled. Milonov, who is the author of Russia’s “gay propaganda” law, denies making the call.

Milonov is a formerly Baptist convert to the Russian Orthodox Church and has been photographed wearing an “Orthodoxy or death!” t-shirt. The film festival reportedly resumed the following night.