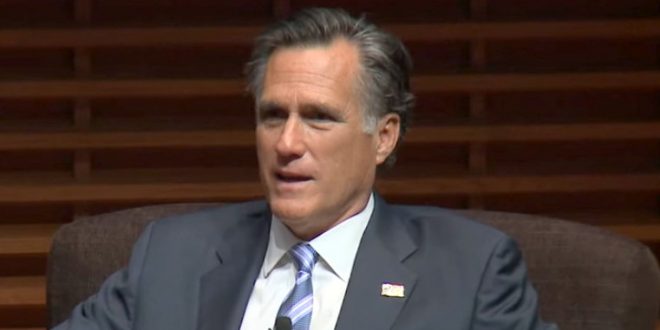 Mitt Romney on Friday told reporters he has not been a leader of the “Never Trump” movement among Republicans, a statement that contradicted strongly critical remarks made on the 2016 campaign trail and in the years since. The former Massachusetts governor and 2012 Republican presidential nominee is running for Senate in Utah. On Friday, he attended a rally in a suburb of Phoenix in support of the GOP senatorial candidate in Arizona, Martha McSally.

Asked, “You led the Never Trump movement, what happened with that?” a smiling Romney said: “I don’t think that was the case. President Trump was not the person I wanted to become the nominee of our party but he’s president now. The policies he’s promoted have been pretty effective and I support a lot of those policies. When there’s a place where I disagree I point that out.”

The most notable instance of Romney expressing his displeasure with Trump’s candidacy came in March 2016, when he held a news conference laying out a plan for voters in various states to help block Trump from winning the party’s nomination. “Donald Trump is a phony, a fraud,” Romney told an audience at the University of Utah at the time.

In the speech, he suggested viewers play the delegate process against Trump, meaning, he said, that voters should cast their primary ballots for “whichever one of the other two contenders has the best chance of beating Mr. Trump in a given state.”