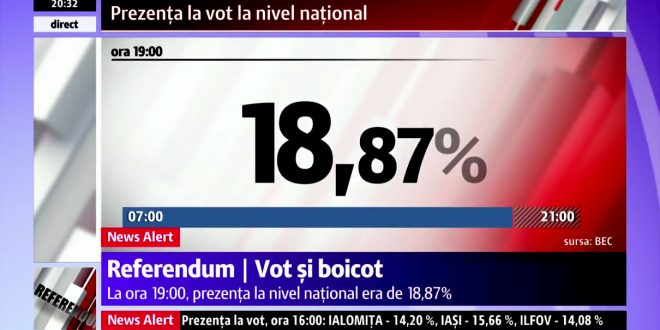 A two-day referendum to change Romania’s constitution so same-sex couples cannot secure the right to marry failed to meet the required 30 percent voter turnout to be validated, a preliminary estimate from an opposition party showed on Sunday.

Opposition Save Romania Union (USR) said they estimated voter turnout stood at 19.5 percent when polls closed at 1800 GMT. Data from the national election bureau has showed just under 19 percent of Romanians had voted by 1600 GMT.

Same-sex marriages are not allowed in Romania, according to the Civil Code, but those supporting the referendum argued that the notion of marriage also needed to be clarified in the Constitution, to avoid a situation in which the Civil Code could be changed.

The Coalition for Family urged people to go to the referendum “for the future of their children” while priests all over the country told their parishioners that it is their Christian duty to vote for changing the Constitution.

The Coalition for Family’s representatives said on Sunday that their efforts and those of the Church have been sabotaged by the political parties, which haven’t really engaged in bringing people to the polls, despite their leaders’ statements.

The Coalition for the Family, the NGO behind the two-day referendum held in Romania, released a statement accusing political parties of ‘widespread boycott’ targeting Christians.

“For all who have falsely stated, in an unprecedented misinformation campaign since the 1989 Revolution, that this Referendum is one of the Social Democratic Party and of its leader, Liviu Dragnea, is now becoming evident through the boycott of the PSD in the entire country, that these claims are false.

PM Viorica Dancila says she voted “Yes” in the referendum. “Each of us has the civic duty to express ourselves about themes that are important for society. Family is an important topic for all of us. I voted for the values in which I believe,” she said after voting at a high school in Bucharest.

The anti-gay referendum was scheduled after a concerted push by US-based hate groups including the Alliance Defending Freedom and the Liberty Counsel.

PSD after referendum: it is a huge failure for #Romania. The referendum regarding “traditional family” will be invalidated. Liviu Dragnea did not speak tonight, His Leadership at PSD will probably be challenged again pic.twitter.com/z6aCAMIRch

Massive fail for the anti-LGBT #referendum in #Romania tonight as the turnout stops at about 20%. It was a huge slap for politicians, but also for the Orthodox Church, which proved it cannot mobilise people as was feared before. A massive unexpected win for progressive Romania. pic.twitter.com/UTZliXhBsf

Romania referendum fails. Turnout was 19% but they needed 30% to make it law. Combination of can’t be bothered, voters seeing through PSD ploy to distract them from attacks on judiciary and corruption and simply not agreeing with the proposition.

RELATED: Last month the Romanian Constitutional Court ruled that gay couples should have the same rights as all families. In June 2018, the European Union’s top court ruled that member nations must grant residency rights to LGBT couples legally married in other EU countries. In that case, an American man had married a Romanian national in Brussels. Same-sex marriage is legal in 14 of the 28 EU member nations.