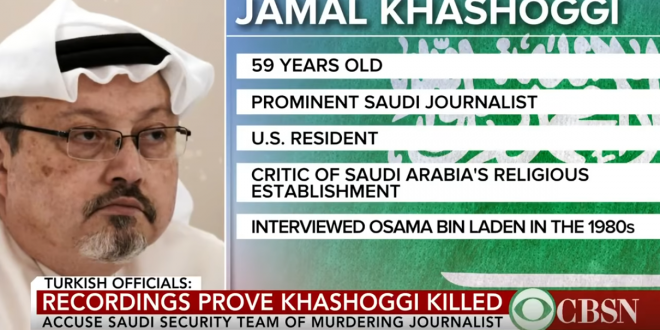 Missing Saudi journalist Jamal Khashoggi may have recorded his own death, a Turkish newspaper reported Saturday morning. Khashoggi turned on the recording function of his Apple Watch before walking into the Saudi consulate in Istanbul on October 2, according to Sabah newspaper.

The moments of his “interrogation, torture and killing were audio recorded and sent to both his phone and to iCloud,” the pro-government, privately owned newspaper paper reported. The Turkish newspaper said conversations of the men involved in the reported assassination were recorded.

Security forces leading the investigation found the audio file inside the phone Khashoggi left with his fiancé, according to Sabah. CNN cannot independently verify the Sabah report and is seeking comment from both Saudi and Turkish officials.

TechCrunch is discounting the report:

Even if Khashoggi entered the Saudi consulate wearing that model, a third-generation Apple Watch does not support cellular connections in Turkey, effectively ruling out any chance that his health data synced either with his iPhone outside or Apple’s servers.

It’s also unlikely that the watch connected to a known Wi-Fi network inside the consulate, or that the watch was within close enough range to sync with his iPhone outside using Bluetooth.

In any case, if health data from Khashoggi’s watch was transmitted over the air to Apple’s iCloud where it could be synced with his iPhone, the data is end-to-end encrypted with his passcode.

Some are speculating that Turkey is floating the Apple Watch story to cover up for having bugged the Saudi consulate.