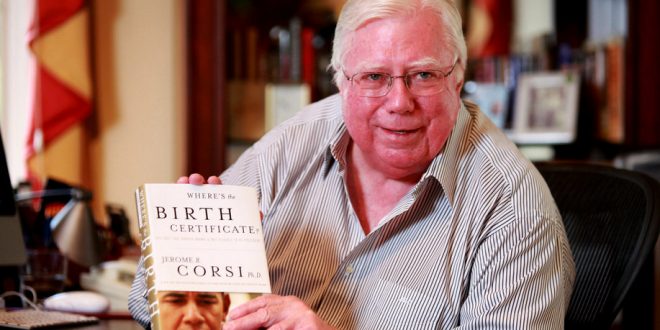 REPORT: Mueller Is Closing In On Birther Jerome Corsi

Special counsel Robert Mueller’s office has obtained communications suggesting that a right-wing conspiracy theorist might have had advance knowledge that the emails of Hillary Clinton’s campaign chairman had been stolen and handed to WikiLeaks, a source familiar with the investigation told NBC News.

Mueller’s team has spent months investigating whether the conspiracy theorist, Jerome Corsi, learned before the public did that WikiLeaks had obtained emails hacked by Russian intelligence officers — and whether he passed information about the stolen emails to Donald Trump associate Roger Stone, multiple sources said.

Mueller’s investigators have reviewed messages to members of the Trump team in which Stone and Corsi seem to take credit for the release of Democratic emails, said a person with direct knowledge of the emails.

Corsi, you surely recall, was for years arguably the most prominent birther and wrote dozens of insane columns for World Net Daily.