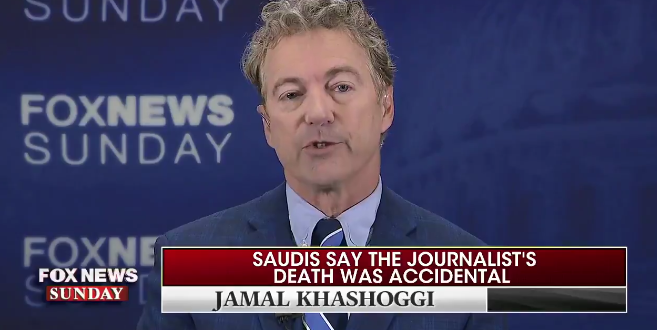 Sen. Rand Paul (R-Ky.) said Sunday that he does not believe Saudi Arabia’s explanation of how dissident Saudi journalist Jamal Khashoggi died earlier this month. “Absolutely not, it’s insulting,” Paul told Fox News Sunday, when asked if he believed the Saudis’ statement that Khashoggi died in a brawl gone wrong at the Saudi consulate in Istanbul on Oct. 2.

“There’s no way 15 people were sent to Turkey to kill a dissident without the approval of the crown Prince,” Paul said, referencing the fifteen Saudis a pro-government Turkish paper alleged were involved in Khashoggi’s disappearance. Saudi Arabia said 18 were arrested in connection with the incident.

.@RandPaul tells Chris: “There’s no way 15 people were sent from Saudi Arabia to Turkey to kill a dissident without the approval of the Crown Prince.” #FNS pic.twitter.com/F23CBMhzIq