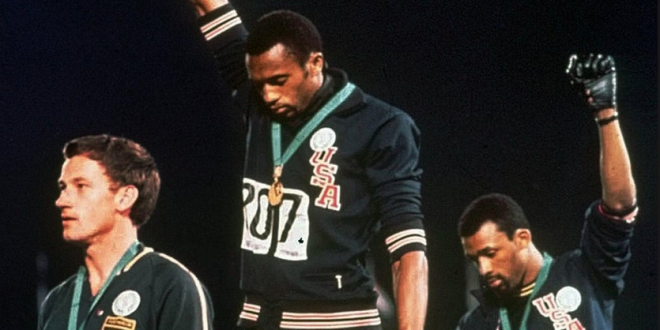 Puma is launching a campaign to mark the 50th anniversary of U.S. sprinter Tommie Smith’s black-gloved salute at the 1968 Olympics, shortly after rival Nike scored a hit with an ad featuring a modern-day activist for racial equality.

Nike saw a jump in sales after its advertisement with American footballer Colin Kaepernick, who began kneeling during the U.S. national anthem at NFL games in 2016 to protest against police shootings of unarmed black men – a gesture that has drawn the ire of President Donald Trump.

Puma’s #REFORM campaign will see brand ambassadors such as rapper Meek Mill call for people to post images of themselves online with a raised fist to commemorate Smith’s silent salute at the Mexico Olympics on Oct. 16, 1968.

Previous 20 Democratic Senators Petition Pompeo To Reverse “Cruel” Denial Of Visas To Partners Of LGBT Diplomats
Next Kanye In The Oval Office: Trump Might Not Expect A “Crazy Motherfucker” Like Me Supporting Him [VIDEO]