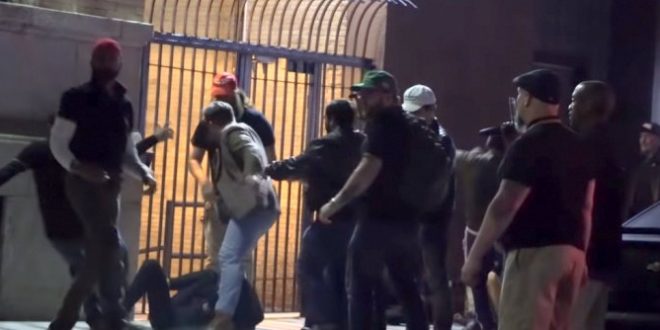 He’s like a whole new man, er, Boy! One of the Proud Boy goons busted last week over a brawl with Antifa protesters outside an Upper East Side Republican club underwent a total makeover for his court appearance Thursday.

John Kinsman, 39, shaved his long, scruffy beard, chopped off his scraggly hair and ditched his Carhartt overalls for a gray suit and tie. Kinsman, one of five Proud Boys arrested so far, was previously described by Assistant DA Joshua Steinglass as the “single most vicious of all the attackers” that night.

According to prosecutors, Kinsman body slammed, repeatedly punched and stomped on an Antifa member all while a cigarette dangled from his mouth. The father of two faces assault, attempted gang assault and riot raps.

Previous Hannity Goes Full Whataboutist On #MAGAbomber
Next Trump Rejects Calls To Tone Down Rhetoric: I Could Really Tone It UP Since The Media Is So Unfair [VIDEO]