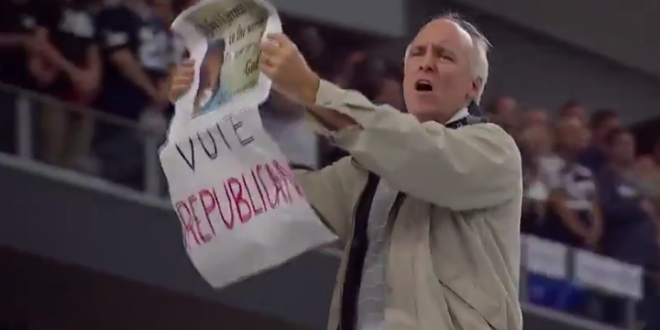 Once again, a protester took action during the national anthem prior to an NFL game, speaking out on a cause important to them and using the anthem and an NFL game as a platform for their views. But this time, the protester wasn’t a player, and he wasn’t speaking out against racial inequality.

During Sunday’s national anthem, an as-yet-unidentified protester raised a “Stop Abortion / Vote Republican” sign and walked across the roof of AT&T Stadium’s field suites just prior to the Dallas Cowboys’ game against the Jacksonville Jaguars.

According to observers on the scene, the protester carried a sign with “Stop Abortion” on one side, and “Vote Republican” on the other. Security officials guided the man back toward the seats, and it did not appear he was asked to leave, according to local reports.

A closer look at the protester at the Jaguars-Cowboys game. He did this during the entire national anthem before being escorted off by security. @NBCDFW @BlueStarBlog pic.twitter.com/6A8hpTAJPi

During that anthem a protester walked up and down holding a sign saying “vote republican” on one side and “stop abortion” on the other.
Security escorted him back to the seats and it didn’t appear he was asked to leave. pic.twitter.com/jPz58o0rIa