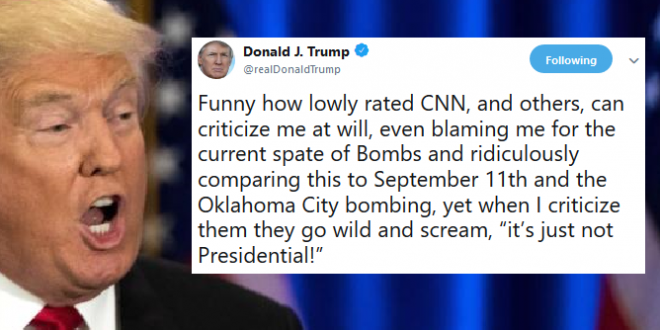 At the end of a week in which 10 suspected pipe bombs were sent to prominent liberal leaders over a 72-hour period, President Trump took to Twitter past 3 a.m. Friday to criticize CNN, another recipient of a suspicious package, for coverage that he said compared this week’s news to 9/11 and the Oklahoma City bombing.

For the president, CNN, a cable news network he once said he doesn’t watch, remains a favorite topic on Twitter. Since June 16, 2015, the day he announced his candidacy for the Republican presidential nomination, the president has tweeted about CNN more than 260 times.

Funny how lowly rated CNN, and others, can criticize me at will, even blaming me for the current spate of Bombs and ridiculously comparing this to September 11th and the Oklahoma City bombing, yet when I criticize them they go wild and scream, “it’s just not Presidential!”

Previous CHATTER AWAY: Overnight Open Thread
Next Geraldo: The Bombs Are An “Elaborate Hoax” [VIDEO]