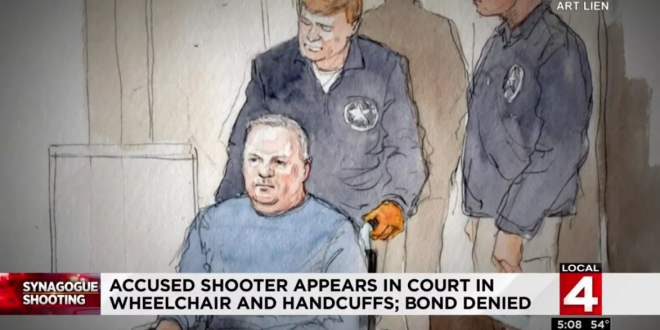 The man accused in the Pittsburgh synagogue massacre appeared briefly in federal court in a wheelchair and handcuffs Monday to face charges he killed 11 people in what is believed to be the deadliest attack on Jews in U.S. history.

Robert Gregory Bowers, who was wounded in a gun battle with police during the shooting rampage, was released from a hospital and wheeled into the courtroom, where he was ordered held without bail for a preliminary hearing on Thursday, when prosecutors will outline their case against him.

During the proceeding, Bowers talked with two court-appointed lawyers, went over documents and confirmed his identity to a judge, saying little more than “Yes” in a soft voice a few times. Courtroom deputies freed one of his hands from cuffs so he could sign paperwork. He did not enter a plea.