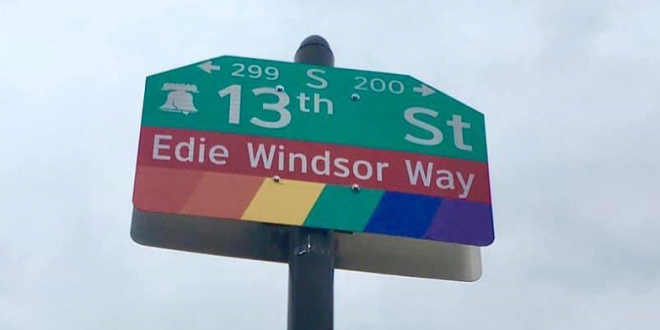 A street sign in honor of lesbian campaigner Edie Windsor was unveiled on October 7.

Windsor died in September 2017 aged 88 after spending most of the past decade of her life fighting for the recognition of same-sex couples in the country.

From the Philadelphia City Council’s resolution:

WHEREAS, Edith “Edie” Schlain Windsor was a native Philadelphian, Temple University alumnus, iconic national LGBTQ-rights activist, and whose lawsuit against the federal government is widely regarded to have paved the way for nationwide marriage equality and is among the most important U.S. Supreme Court rulings for LGBTQ rights in American history.

WHEREAS, Edith Windsor was the lead plaintiff in the landmark 2013 case, United States v. Windsor, which led the U.S. Supreme Court to rule the Federal Defense of Marriage Act unconstitutional, and for the first time guaranteed same-sex couples the right to federal recognition and benefits previously accorded to heterosexual spouses; and

WHEREAS, The City wishes to commemorate and honor the legacy of Edie Windsor through the renaming of the 200 block of South 13th Street in her honor; now, therefore be it

RESOLVED, BY THE COUNCIL OF THE CITY OF PHILADELPHIA, That the 200 block of South 13th Street, between Walnut Street and Locust Street in the City of Philadelphia, shall henceforth also be known as “Edith Windsor Way”.

Edie’s block is in the heart of Philly’s gayborhood. I took the photo below at last year’s NYC Pride parade.