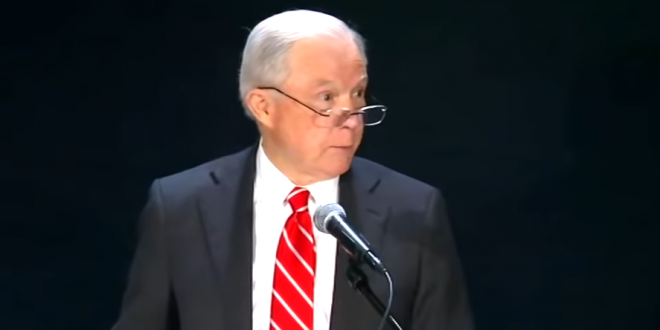 Pastors Booted From Sessions Speech After Quoting Bible: “I Was A Stranger And You Did Not Welcome Me”

A Methodist pastor from Massachusetts was escorted out of the room today after interrupting Attorney General Jeff Sessions to question the Trump administration’s immigration policies. Sessions was speaking at the Boston Lawyers chapter of the Federalist Society when a man, later identified as United Methodist Pastor Will Green of Ballard Vale United Church in Andover, Mass., interrupted with quoted lines from the Bible.

“I was hungry and you did not feed me. I was a stranger and you did not welcome me. I was naked and you did not clothe me,” Green said. “Brother Jeff, as a fellow United Methodist I call upon you to repent, to care for those in need, to remember that when you do not care for others, you are wounding the body of Christ.” The pastor was then escorted from the room. Another pastor, identified as Darrell Hamilton of First Baptist Church of Boston, also addressed Sessions and was escorted out.

Religious leaders interrupt Attorney General Jeff Sessions’ speech: “Brother Jeff, as a fellow United Methodist I call upon you to repent, to care for those in need.”

Sessions: “Well, thank you for those remarks and attack but I would just tell you we do our best everyday” pic.twitter.com/NUq5HSZZMg

Jeff Sessions responds to protesters: “I don’t believe there’s anything in my theology that says a secular nationstate cannot have lawful laws to control immigration … not immoral, not indecent and not unkind to state what your laws are and then set about to enforce them” pic.twitter.com/oGjtMM67ru