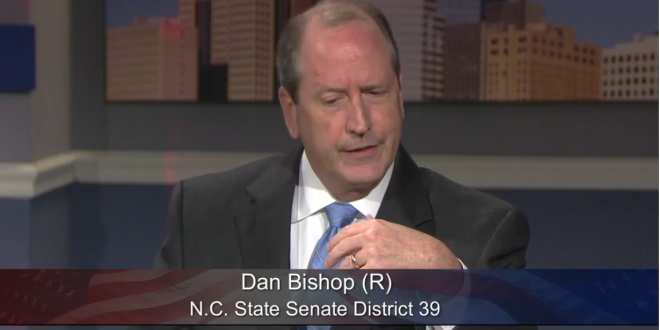 A Republican politician is an investor in Gab, the now-shuttered social media network used by the Pittsburgh synagogue gunman, DailyMail.com can disclose. Dan Bishop, a state senator in North Carolina who is up for re-election next week, boasted in August 2017 that he had backed the site because he was “about done with SF thought police tech giants.”

Bishop is one of the only known investors in the tech startup, which had billed itself as ‘a free speech platform’ for anyone who wanted to join. It used anonymous crowd-sourcing techniques to raise investment cash and is based in Austin, Texas.

But the site has become infamous as a haven for alt-right discourse and conspiracy theories, as well as being used by gunman Robert Bowers, 46, to spread vile anti-Semitic slurs.

A Republican senator from Charlotte said Wednesday that he’s being “smeared” over a one-time investment in a social media site popular with white supremacists and used by the alleged synagogue shooter in Pittsburgh. Accused Pittsburgh shooter Robert Bowers posted on gab shortly before going to the synagogue, according to The New York Times.

Democrats called on Bishop to disavow the site. “Our community deserves to know why Dan Bishop was funding a platform for hate speech,” said Chad Stachowisz, his Democratic opponent. “His investment helped spread white nationalist content, so we deserve to know if he holds these views. Dan Bishop should have known he was playing with fire.”

Bishop was the lead author of North Carolina’s controversial anti-LGBT law HB2, Towleroad reported in 2016. Emails obtained that year by the Charlotte Business Journal revealed Bishop comparing LGBTQ activists to the Taliban and saying that the LGBTQ movement “jeopardizes freedom.”

Thanks to his anti-LGBTQ efforts, Bishop is a favorite of Religious Right groups. In 2017 the North Carolina Family Policy Council presented him with its “Life & Liberty Award.”

Bishop, the group said, stands “unwaveringly” for “the inherent dignity of every individual.” That same year, Concerned Women for America’s North Carolina chapter honored him as “Outstanding Legislator in Defense of Family Values.”

Bishop claims he only made a one-time $500 investment in the site. Democrats note that his support came only days after the deadly Nazi riot in Virginia.