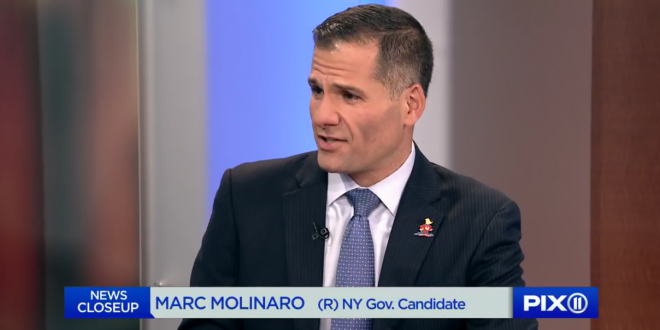 GOP gubernatorial candidate Marc Molinaro on Tuesday said he is “a bit ashamed” that a Manhattan Republican Club invited the head of the ultra-national right wing group The Proud Boys to speak over the weekend. “I’m embarrassed these individuals were invited to speak,” Molinaro said during a 90-minute appearance before the Daily News Editorial Board.

Molinaro—who along with other top Republicans were criticized by Gov. Cuomo for remaining silent on the issue — also expressed regret that he didn’t speak out sooner, saying he didn’t realize just what the Proud Boys were and that his role as the top of the state Republican ticket cried out for him to say something.

He initially blasted “radical leftists” for vandalizing the GOP clubhouse prior to the appearance of Proud Boys founder Gavin McInnes without knowing all the facts about the group he represented.

The attacks were carried out Friday night near the Metropolitan Republican Club in New York City, where Proud Boys founder Gavin McInnes had been invited to speak to the GOP faithful and feted as someone who’d “taken on and exposed the Deep State Socialists and stood up for Western Values.”

Those who were beaten appeared to be people who’d shown up to protest the event, although the attacks took place blocks away from the club. McInnes himself has engaged in violence and promoted its use. He was seen on video last year punching a protestor in Washington, D.C., and he has declared: “I cannot recommend violence enough. It’s a really effective way to solve problems.”

Friday night, he brought a sword to his speech at the Republican club and performed a dramatic reenactment of what he described as an “inspiring moment” in history — the assassination of Japanese socialist leader Inejiro Asanuma by a teenage ultra-nationalist. As he left the venue, he brandished the samurai blade in the street for good measure.

In reaction to the violent incident in which pro-Trump group the Proud Boys assaulted protesters after attending an event at a Manhattan Republican club by group founder Gavin McInnes, Sean Hannity falsely claimed on the October 15 edition of his radio show that he “had never heard of” the Proud Boys.

In addition to hosting McInnes 24 times on his Fox News show, Hannity also hosted “prominent Proud Boy” Jovi Val on his radio show in 2017, giving him and far-right conspiracy theorist Laura Loomer a platform to talk about “political violence.”

Val has participated in Proud Boy events and last August was a speaker at the second edition of the Unite the Right rally, a white supremacist melee organized by white nationalist Jason Kessler. The first edition of Unite the Right, held in Charlottesville, VA, resulted in the death of counterprotester Heather Hayer after a white supremacist rammed a car into a crowd.

The nine Proud Boys being sought by the NYPD face potential hate crime charges for using homophobic slurs during their attack. As I noted yesterday afternoon, most of them have been thoroughly doxxed on Twitter and several appear to have ties to known neo-Nazi groups.

Authorities must review these videos immediately and make arrests and prosecute as appropriate. Hate cannot and will not be tolerated in New York.

Here’s a message from a Queens boy to the so-called ‘proud boys’ – ​NY has zero tolerance for your bs. ​https://t.co/xGxIqeZumm