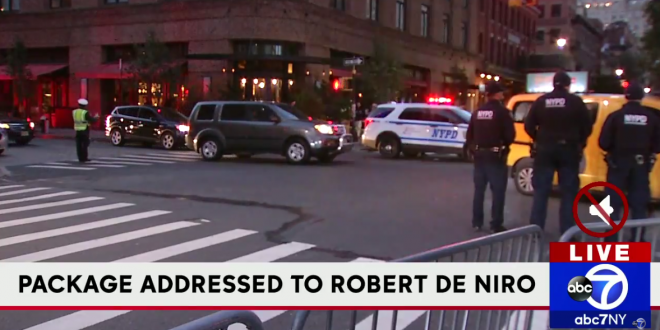 A suspicious package was sent to the Tribeca restaurant owned by actor Robert De Niro, police sources told The Post on Thursday. The parcel was “the same” as those containing pipe bombs sent to prominent Democrats, including former President Obama, Hillary Clinton, along with CNN’s New York bureau, the sources said. The Tribeca Grill, along with the building next door has been evacuated.

Streets are closed down in the Tribeca area of Manhattan as police investigate. The package was discovered a day after a sprawling investigation unfolded as authorities scrambled to respond to a series of suspicious packages. The Secret Service intercepted two packages that were addressed to former President Obama’s home in Washington and Bill and Hillary Clinton’s residence in Westchester County, New York.

MORE: The package sent to Robert De Niro was identical to the those recovered yesterday in contents and appearance, law enforcement source tells @ABC News.