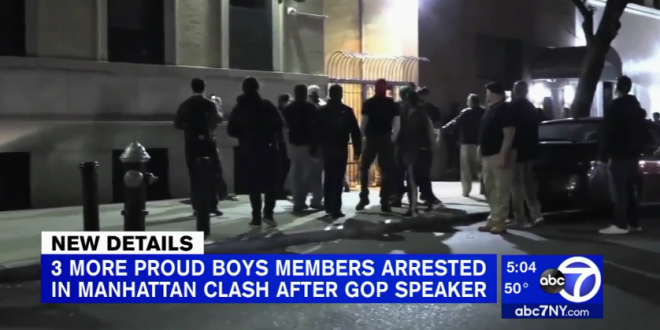 Police have made five arrests in connection with a violent clash that erupted outside of a Republican club following a speech by the founder of a controversial far-right group. Authorities say 38-year-old Geoffrey Young, a member of the group known as the “Proud Boys,” was arrested Thursday and charged with riot and attempted assault. Jay Kinsman was taken into custody Friday, and he is charged with attempted gang assault, attempted assault, riot and criminal possession of a weapon.

Then on Monday, the NYPD announced the arrests of 41-year-old Irvin Antillon, 40-year-old Douglas Lennan and 26-year-old Maxwell Hare. All three are charged with riot and assault, while Hare faces additional charges of gang assault and criminal possession of a weapon. All five are among a dozen suspects police say were involved a series of fights following a speech by Gavin McInnes, the founder of the Proud Boys, who describe themselves as “Western Chauvinists.”

Antillon is a member of the primarily Latino ultranationalist skinhead crew B49, or “Batallon (Battalion) 49.” Antillon also attended the deadly “Unite the Right” rally in Charlottesville as a member of the Fraternal Order of Alt-Knights, which has been called the “tactical defense arm” of the Proud Boys.

Two other members of the 211 Bootboys, Joe Bola (an online alias) and Dennis Davila, were also photographed at the violent scene.

Davila runs a hate music company called United Riot Records (URR). Bola was photographed wearing a URR shirt Friday night, as he was in May 2017 when he apparently took a photograph with McInnes an anti-Muslim event held in New York City.

On Friday afternoon McInnes declared that he would facilitate the surrender of all nine Proud Boys wanted by the NYPD. It’s not clear if today’s three arrests resulted from that.