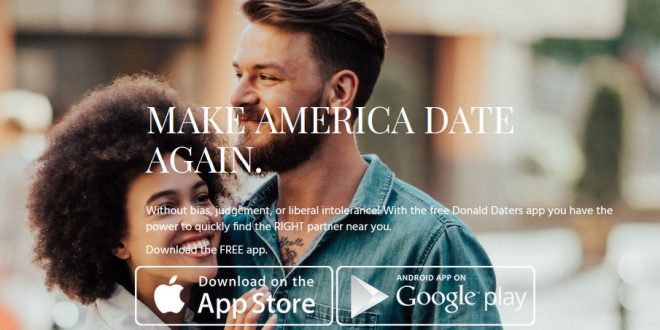 State television is thrilled to promote this:

Enter Donald Daters, a new dating app that launched Monday for Apple and Android devices with the mission of helping Trump supporters meet and mingle on a platform free of any liberal backlash.

“For many young Trump supporters, liberal intolerance has made meeting and dating nearly impossible. Support for the president has become a dealbreaker instead of an icebreaker. That’s why we created a new platform for Trump supporters to meet people without being afraid of talking politics,” said Emily Moreno, CEO of Donald Daters, in a statement.

The app, which is similar to other dating apps like OKCupid and Tinder, gives users a new set of matches each day based on various preferences that they can preset. Users can chat for free when a match is mutual, block any potential liberals that troll them and Donald Daters is open to everyone.

You may recall that a similar site, Trump Singles, faced an uproar after the model on its homepage turned out to have a record for videotaping sex with a 15 year-old girl.

Red looks good on both of you. Think red trumps blue? Download the new DonaldDaters app for like minded supporters of President Trump. #TheRIGHTMatch pic.twitter.com/MILyCW1fgH

Tired of the wrong matches? Get the RIGHT ones. Literally. Download the new DonaldDaters dating app. #TheRIGHTMatch pic.twitter.com/Iaz1OncfTQ