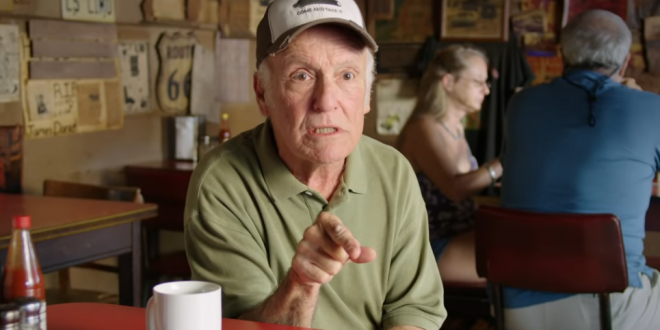 New Ad Eviscerates Ted Cruz: If Somebody Called My Wife A Dog, I Wouldn’t Be Kissing Their Ass [VIDEO]

The camera cuts to a white-haired man sitting in a dimly lit restaurant, its walls lined with Texas license plates and vintage Route 66 road signs, a bottle of red hot sauce on the table. He clutches a diner mug in one hand. “Somebody left something on my door the other day that says, ‘Ted Cruz, tough as Texas,’” he says, laughing. “I mean, come on.”

The older man — actor Sonny Carl Davis — looks into the camera with a deadpan stare. His baseball hat is embroidered with a cannon and the words “Come and take it,” a symbol of Texas pride and defiance. “If someone called my wife a dog, and said my daddy was in on the Kennedy assassination, I wouldn’t be kissing their ass,” Davis says with a slight drawl.

He points emphatically at the camera, leaning forward in his seat. “You stick a finger in their chest and give ’em a few choice words. Or you drag their ass out by the woodshed and kick their ass, Ted.”

The ad is paid for by the Fire Ted Cruz PAC, which is not affiliated with the Beto O’Rourke campaign.