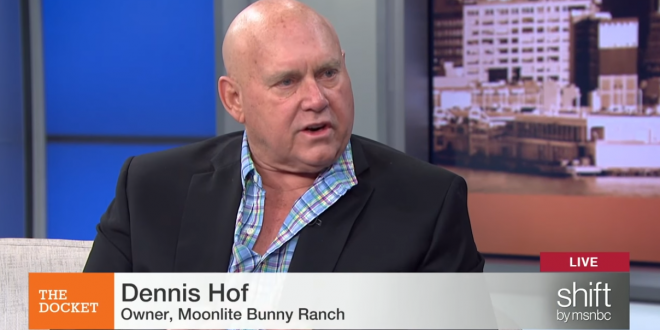 Nevada brothel owner and GOP Assembly candidate Dennis Hof has died. The Nye County Sheriff’s Office confirmed Hof’s death Tuesday morning at the Love Ranch in Crystal, outside of Pahrump. Detectives and deputies are currently on scene and conducting an investigation into his death. Hof was 72 years old. His cause of death is unknown at this time.

Hof owned the Love Ranch, along with a number of other brothels. The Moonlite Bunny Ranch in Northern Nevada was featured on the HBO series “Cathouse.”

While Hof frequently made headlines related to his brothels, he made national news in June when he won the Republican primary for Assembly District 36. Hof called himself the “Trump from Pahrump” and had earlier released a book called “The Art of the Pimp.”

Law enforcement sources tell us they got a 911 call from Hof’s Love Ranch in Crystal, Nevada around 11 AM. We’re told the call was for an unresponsive male. Hof had just celebrated his birthday with a weekend-long bash that included celebs like Ron Jeremy, Flavor Flav, Afroman and Jhonny Buss.

Hof bragged about being a pimp — and came up with his own catchphrase, “There’s no business like ho business.”

The most infamous incident under Hof’s watch went down in October 2015 when Lamar Odom overdosed after a bender at Hof’s Love Ranch South. Blood tests later revealed Lamar had cocaine in his system. Odom was placed in a coma for 3 days after the incident.

BREAKING: @DennisHof’s opponent @lesiaromanov in the #Nevada Assembly District 36 race reacts to news of Hof’s death. “I’m stunned. This is not the turn I would’ve expected.” @reviewjournal pic.twitter.com/Y8DPtQTzWp

Previous Julian Castro: I’m “Likely” To Run For President In 2020
Next REPORT: Cohen Has Spent 50 Hours With Investigators