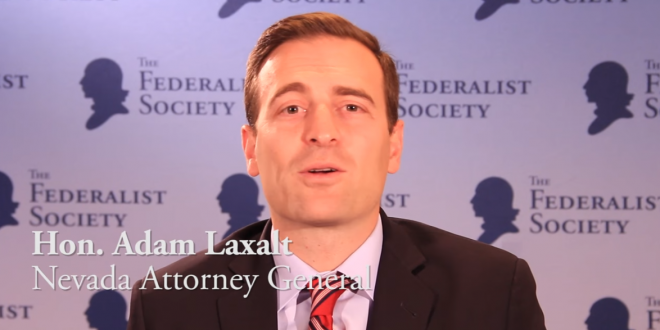 Adam Laxalt, the Republican running for governor in Nevada, was targeted by 12 of his family members in a brutal op-ed detailing the personal and professional reasons they say he is unfit for office. Laxalt is no stranger to familial drama, having been fathered by Sen. Pete Domenici (R-NM) with the much-younger daughter of his peer, Sen. Paul Laxalt (R-NV), in an extramarital affair. Laxalt’s mother, Michelle, did not reveal his parentage until 2013, which made huge waves in Nevada and sent him on his way to political stardom.

For those of us who were actually raised in Nevada, it’s difficult to hear him continue to falsely claim that he was raised in Nevada or has any true connections to Nevadans. The simple fact is that while he may have been born in Reno, he left as an infant and was raised on the East Coast, 3,000 miles away, in Washington, D.C., and moved here only in 2013, only one year later launching his political career. Aside from the occasional short visit, Adam never knew the state or its people.

If he responds to this column at all, it will probably be to say that he hardly knows the people writing this column. And in many ways that would be true. We never had a chance to get to know him, really — he spent his life in Washington, D.C., while we lived in Northern Nevada and grew up in public schools and on public lands. He moved to Nevada in 2013 so that he could lean on the reputation of a family that he hardly knew while tapping into support by donors who had no interest in our state or its people.