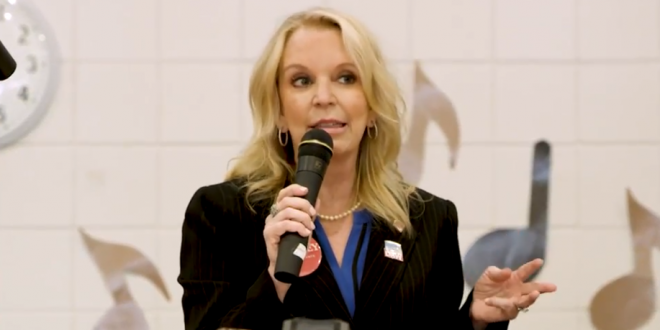 Republican Karin Housley, a state senator running to represent Minnesota in the U.S. Senate, compared then-first lady Michelle Obama to a “chimp” in 2009. In an April 2009 Facebook post, Housley criticized the first lady’s posture when she met Queen Elizabeth II.

“Michelle is soooo far from cool. Don’t we expect our First Ladies to at least stand up straight? (And my dear sister, know the proper etiquette and DO NOT TOUCH THE QUEEN!),” Housley wrote on her Facebook wall.

“I do miss Nancy Reagan. Ronald even more. Speaking of Bedtime for Bonzo, I think even that chimp stood up straighter than Michelle,” Housley wrote. “Uh-oh, someone is going to make a comment.”

“It’s not surprising the Huffington Post—basically an extension of the Democratic Party—would do Tina Smith’s dirty work for her. This is what the radical left does when they are losing—they attack Republicans so they don’t have to come up with solutions to the problems Minnesotans are facing.”

Housley has been ranked among Minnesota’s most anti-LGBT state legislators for her votes against same-sex marriage and anti-discrimination measures.