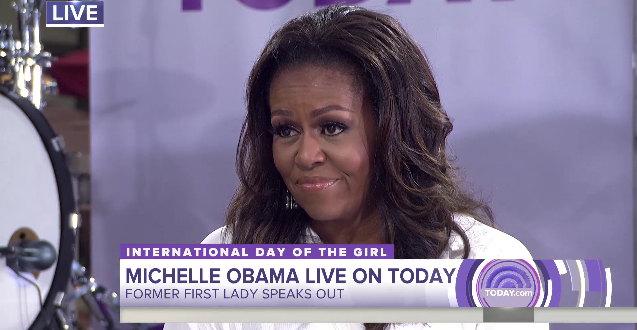 Michelle Obama On Running For Office: Absolutely Not

No matter how much fans beg her, a career in politics is not Michelle Obama‘s path. The former first lady, 54, addressed rumors that she’d run for office and other aspects of the often contentious current political climate during an appearance on Today in celebration of the International Day of the Girl, Thursday.

When anchor Savannah Guthrie asked if she was interested in pursuing a career in politics, Mrs. Obama answered, “Absolutely not. I’ve never wanted to be a politician. Nothing has changed in me. I want to serve. … There are so many ways to make an impact. Politics is not my thing. It’s as simple as that.”

“Would you ever run for elected office?” @savannahguthrie asks @MichelleObama pic.twitter.com/AUASXkrP0E

Previous Avenatti: Junior Will Be Indicted By The End Of 2018
Next Glorious Leader: Devin Nunes Deserves The “Medal Of Honor” For Defending Me Against Russian Witch Hunt