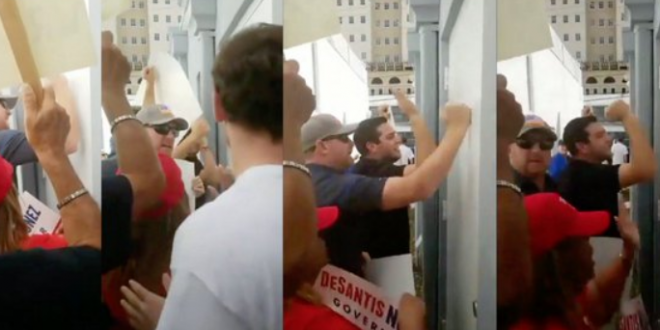 Nancy Pelosi was hounded by a group of protesters in Florida — with some cursing and calling her a “communist.” Video of the confrontation shows the small group of hecklers shouting obscenities and calling Pelosi a communist in English and Spanish as she walks into a Wednesday campaign event for congressional hopeful Donna Shalala in Coral Gables.

“You don’t belong here you f–ing communist f-k,” one person howls. “You and your f–ing Democrats.” When Pelosi wordlessly walks by and enters the building, the protesters start pounding on the door. “Open up! It’s the Proud Boys in here,” one person says, referring to the far-right hate group involved in a brawl in Manhattan last weekend.

Photographs taken of the protest around the event, which appears to have been organized by Nelson Diaz, the chairman of the Republican Party in Miami-Dade County, according to emails posted online by radio host Grant Stern, show some protesters with Proud Boys gear.

According to the right-wing blog Big League Politics, the video was shot by a man who has been previously identified in reports as the leader of the Miami chapter of the Proud Boys. In an email, Diaz said that he was not a member nor supporter of the group. “Up until a few days ago, I had never heard of them,” he said.

The video was seized on by fringe right-wing sites as a sign of the retribution Democrats face in the wake of other high-profile incidents where Republicans have been confronted by protesters in public at places such as restaurants.

The crowd has grown. They’re striking the door to the building where the event will take place. They’re also screaming “commie” and calling the Democrats “witches.” pic.twitter.com/08ZafRtxwp

It turns out Miami GOP Chair Nelson Diaz was pounding on the Shalala campaign’s door while the Proud Boys leader was yelling “fucking communist!” at Pelosi as she went into Shalala’s campaign office

Wow! Look at this angry mob of Democrats screaming at Nancy Pelosi!

Just kidding. These are the civil Republicans.

“I’ve killed people before! Look at Nancy Pelosi right here! Look at this piece of shit, Pelosi! Open up! Let some ‘proud boys’ in here!”pic.twitter.com/HZg52zwDBp

The Proud Boys, called a hate group by the SPLC, joined the Miami Dade GOP’s protest of Shalala’s office event with Pelosi yesterday