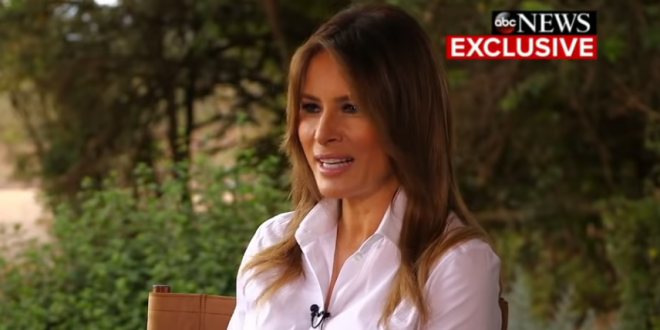 Melania Shrugs Off Reports Of Trump’s Adultery: I Have Much More Important Things To Think About [VIDEO]

First lady Melania Trump brushed off allegations of her husband’s rumored affairs, saying she has “much more important things to think about.” Melania Trump spoke with ABC News’s Tom Llamas while on her first solo tour throughout Africa.

In the interview, which is airing Friday on “Good Morning America,” the first lady she doesn’t have time for gossip. “I’m a mother and a first lady, and I have much more important things to think about and to do,” Melania said when asked about President Trump’s alleged affairs.

“It’s not always pleasant, of course. But I know what is right and what is wrong and what is true or not true,” she added. When asked if she still loved President Donald Trump, Melania Trump replied, “Yes, we are fine. Yes.”

“It’s what media speculate, and it’s gossip. It’s not always correct stuff,” she said. President Donald Trump has been accused of sexual misconduct by at least 13 women. The president has denied the accusations.

“I’m a mother and a first lady, and I have much more important things to think about and to do,” she tells @ABC. https://t.co/RUqYE4Mwjt pic.twitter.com/mxOQRI5wje

ONE-ON-ONE: In an exclusive interview with @ABC, first lady Melania Trump tells @TomLlamasABC that she may be one of the “most bullied” people in the world – and that there are some who work inside the West Wing she doesn’t believe her husband can trust. https://t.co/PSPXVnXrHm pic.twitter.com/gts15opcVj

Previous Kimmel On Kanye: This Was A Conversation Typically Held Between People Wearing Hospital Bracelets
Next Federal Court Partially Unseals Watergate “Road Map” Which Could Be Used To Aid Mueller’s Investigation