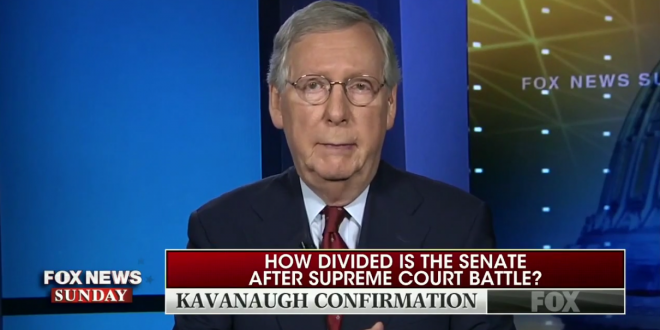 In 2016, when Senate Majority Leader Mitch McConnell (R-KY) announced Republicans’ plan to keep the late Supreme Court Justice Antonin Scalia’s seat open until the next president took office, a year away, he issued a conclusive statement.

“The American people should have a voice in the selection of their next Supreme Court Justice. Therefore, this vacancy should not be filled until we have a new President.”

McConnell now claims that in blocking Obama nominee Merrick Garland’s confirmation process for months, “we simply followed the tradition in America, which is that if you have a Senate of a different party than the President you don’t fill a vacancy created in a presidential [election] year.” I’ll never get over this: GOP blocked Merrick Garland’s nomination for 293 days because it was “too close to the election” but voted to confirm Kavanaugh 30 days before midterms despite sham FBI investigation, lying under oath 10x, unhinged partisan temperament

McConnell now implies he will consider a Trump SCOTUS nominee in the 2020 election year, if Republicans hold the Senate in 2018: pic.twitter.com/1mApkA7uVD