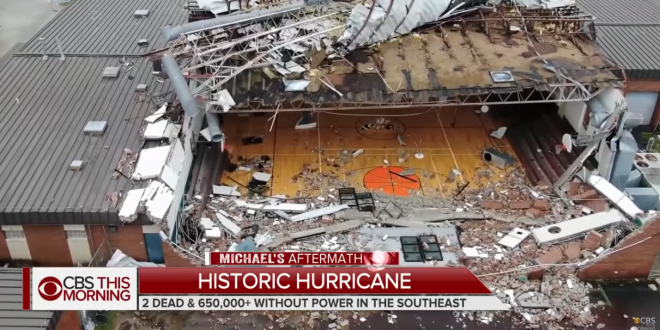 The Category 4 hurricane was the fiercest to hit Florida in 80 years when it came ashore on Wednesday, but its strength waned as it pushed into Georgia. Early on Thursday, it was downgraded to a tropical storm, with top sustained winds diminishing to 60 miles per hour.

More than 700,000 homes and businesses were without power in Florida, Alabama and Georgia early Thursday. Thousands hunkered down in shelters overnight after fleeing their homes to escape the fast-approaching storm.

After making landfall near Mexico Beach around 2 p.m. ET, the eye of Michael moved inland over the Florida Panhandle east of Panama City. Wind gusts blew out windows in homes and office buildings, including the First Federal Bank.

Stores and entire shopping centers that were turned into piles of rubble. Other buildings were stripped of their walls and roofs or ripped apart by downed trees and power lines.

Medical Sacred Heart lost its windows and sustained damage to its roof and exterior walls. The hospital said it is running off of generators and patients have been moved to safe areas of the facility.