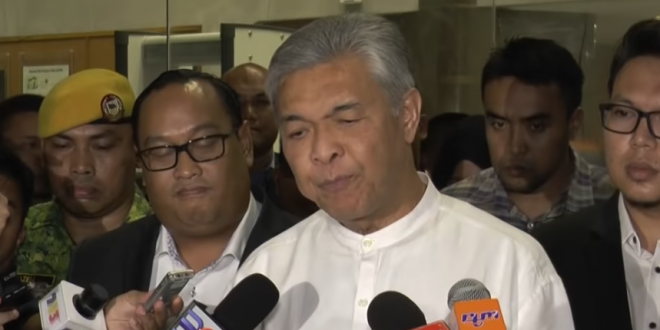 MALAYSIA: Party Leader Calls For Stepping Up Ex-Gay Torture Before God Sends Earthquakes As In Indonesia

Opposition leader Ahmad Zahid Hamidi expressed concerns about efforts needed to stem lesbian, gay, bisexual and transgender (LGBT) activities in the country, saying a recent earthquake in Indonesia was caused by such behaviour. Speaking at the Dewan Rakyat today during Question Time, Ahmad Zahid said he was worried that Malaysia might similarly incur the wrath of Allah due the LGBT community’s activities here.

“We look at the situation in Malaysia, we are worried because we know what happened in Palu recently where there was an earthquake and tsunami. It was reported that there were more than 1,000 members of their community who were involved in such (LGBT) activities. As a result the entire area was destroyed. This is the punishment of Allah. My question is whether Jakim’s programmes (to rehabilitate the LGBT) is successful. We need to ensure that Malaysia and those who are against LGBT are spared Allah’s punishment.”

Three days ago from the Straits Times:

Ahmad Zahid Hamidi, 65, a former deputy prime minister, was charged Friday with money-laundering, abuse of power and criminal breach of trust involving more than RM114 million (S$38 million). Some of the charges are linked to his welfare foundation, which builds religious schools, mosques and orphanages. “I take it as a test from God since all the charities were deemed as violation of law by certain quarters,” he said. But most of the 45 charges leveled against him were tied to corruption during his tenure as home minister.

Malaysia formally launched its federal ex-gay torture program in early 2017 with a video contest for students.

Of all the pressing issues the Opposition Leader @Zahid_Hamidi could have raised, he chose this. Corruption is the biggest social ill and immoral activity in Malaysia. State UMNO’s stance on this instead. pic.twitter.com/tjFtg4JE4s