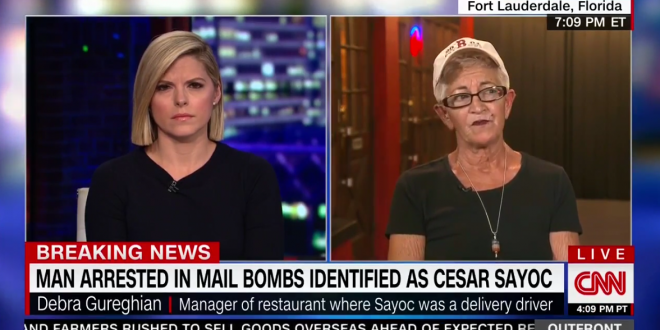 #MAGAbomber’s Lesbian Boss: He Told Me I’d Be The First One He Burns When White Supremacists Take Over

“He had issues. He was anti-gay, anti-black, anti-Jewish, you name it. Everybody that really wasn’t white and wasn’t a white supremacist didn’t belong in the world. That’s what he used to say to me all the time. As far as an employee, he was on time, he was cordial, he was articulate. I never had any problems with him, there was no theft, my customers liked him. But it was just his political views that scared me. Basically he was a model employee.

“He knew I was a lesbian and a very proud lesbian. He made it a point to tell me that God had made a mistake with me and that I should burn in hell along with my black friends. But my mother brought me up to always, you know, believe the best in people and turn the other cheek. I’ve had people not like me because I’m gay.

“He was not a friend of mine, I just hired him. He did his job and that’s how I looked it. I didn’t accept his political views, we had arguments about it. He asked me many, many times out to see some shows with him, [but] I couldn’t bring a partner, I had to go alone. I can’t fire somebody because I don’t like their political views. As much as I’d like to, I couldn’t.

“He was driving me home one night because it was raining and when I get in the van, I just remember looking… is there any way I can get out? Because I remember him telling me that as much as he liked me as a general manager, he hated me as a lesbian. He knew that I was a lesbian, very strong lesbian, very proud of my sexuality.

“But more than once he told me that if he had complete autonomy, I would burn in hell with all the blacks and Jews and Hispanics and everybody else. It was just the white supremacists that were gonna rule the world. And he told me, ‘As much as I like you Debra, you’re gonna be the first one I burn.'” – Debra Gureghian, the MAGAbomber’s former boss at a Fort Lauderdale pizza restaurant.

Previous Michael Savage: The #MAGAbomber Is A Liberal Plant
Next CHATTER AWAY: Overnight Open Thread