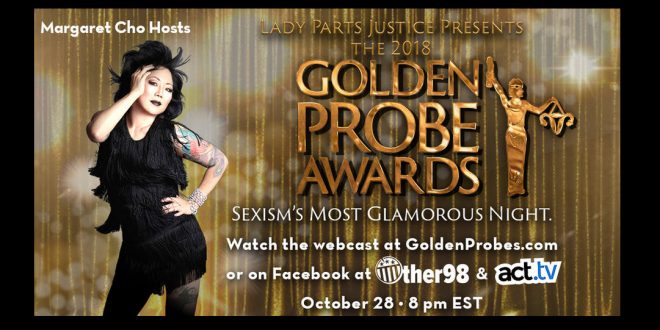 Technically not a live video, since the show was taped in New York City last weekend. But I was there and you’ll enjoy this.

The second Golden Probes taped on Saturday. In the words of creator Lizz Winstead, the satirical awards show “honors so many shitbags.” Hosted by Margaret Cho and featured presenters including Stormy Daniels, Michelle Buteau, Dan Savage and cast members from Orange is the New Black, the show streams online this Sunday, Oct. 28. During the taping, politicians were skewered on their abortion records just as coverage of the midterm elections heated up.

Award announcements for categories like “Best Acting Like You Care About Women in a Non-Supportive Role,” “Best Original Science,” and “Legislature of the Year” were punctuated with commentary from presenters. Musical comedy duo Reformed Whores and other acts performed legislative-themed covers like “Ohio Ooh Na Na” to the tune of “Havana” as dancers in football jerseys rolled around on stage.