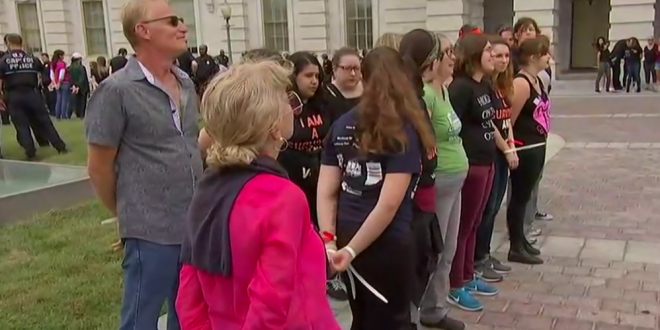 Just before 1 p.m. ET, hundreds of protesters crossed police lines to gather on the steps of the Senate, chanting, “November is coming.”

Earlier in the day, as protesters gathered, some carried signs quoting Christine Blasey Ford, the psychology professor at Palo Alto University who alleged that Kavanuagh sexually assaulted her in high school. “I am here because I believe it is my civic duty,” one sign proclaimed, quoting Ford.

Watch the protests in the first embed below.

Women for Kavanaugh, and many others who support this very good man, are gathering all over Capitol Hill in preparation for a 3-5 P.M. VOTE. It is a beautiful thing to see – and they are not paid professional protesters who are handed expensive signs. Big day for America!

Fox is told the Kavanaugh vote will now start between 3:30 and 3:45 pm et. Senators being asked to be seated and vote from their desks