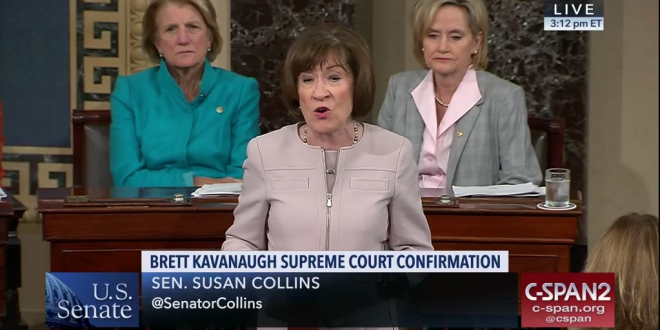 Republican Sen. Susan Collins of Maine — one of four senators who has not yet said whether they will vote to confirm Brett Kavanaugh to the Supreme Court — is expected to announce her decision on the nomination at 3 p.m. ET on Friday, a Senate source told CNN.

A source close to the Senate said that the senator is scheduled to make a speech on the Senate floor, and is expected to vote in favor of a procedural vote to end debate Friday morning, a timeline she confirmed in public comments to reporters Friday moments before that vote. It is unknown how she might vote in the final confirmation vote expected Saturday.

UPDATE: Well, we knew where THAT was going within the first minute of her interminable rant, didn’t we? Collins is a definite “yes” tomorrow.

friend texts me: If Susan Collins had my back in a knife fight, I’d save time and stab myself in the front

Collins is touting his ABA rating.

Does she know that today the announced they’re pulling the rating and re-evaluating after his partisan, crazed rant?

the libs made her do it

Kavanaugh: I WILL SEEK REVENGE ON THE DEMOCRATS WHO WRONGED ME
Collins: See, Kavanaugh is a centrist!

Collins trying to paint Kavanaugh as a justice who is to the left of Ginsburg.

Get her out, Maine voters. She is a garbage senator.

Collins: Christine Blasey Ford’s allegations against Brett Kavanaugh “fail to meet the ‘more likely than not’ standard. Therefore, I do not believe that these charges can fairly prevent Judge Kavanaugh from serving on the court.” pic.twitter.com/UF20WhXlEW

Hey @SenatorCollins, what did McConnell promise you this time, that he won’t follow through on? Remember when he promised you he’d pass legislation to stability the ACA, and didn’t? When will you actually learn how this all works?

.@SenatorCollins should be ashamed of herself for attacking my client and Dr. Ford. How did she make a credibility determination as to my client? How is she qualified to do that without ANY investigation? She did ZERO to determine whether my client and her witnesses were credible

“Me too matters,” Susan Collins said, licking the blood from the knife she just stuck in its back.

total fraud, she is.