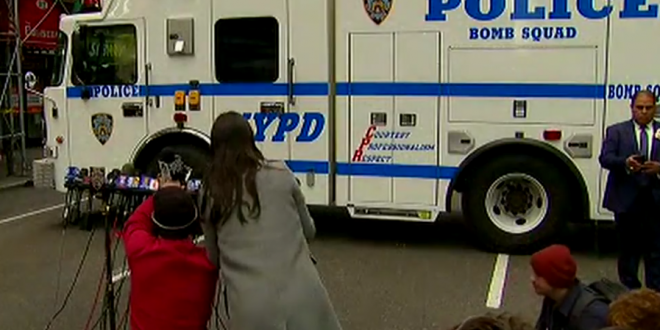 New York state and federal law enforcement authorities are about to give a press conference on the bombing attempts at the Time Warner Center and elsewhere.

NBC News reports that all of the packages are “manila in color,” with “similar or identical components,” and that the return address on each belongs to DNC official Debbie Wasserman-Schultz, whose office was also evacuated due to a suspicious package. The offices of the San Diego Tribune were also evacuated Wednesday in response to a “suspicious package,” according to a tweet from Tribune reporter Kate Morrissey, but the package is not manila.

Previous Michele Bachmann: Over 80% Of The Caravan Migrants Are Gang-Aged Males With Ties To MS-13 [AUDIO]
Next Suspicious Package Sent To Debbie Wasserman Schultz Was Addressed To Eric Holder With Her Return Address