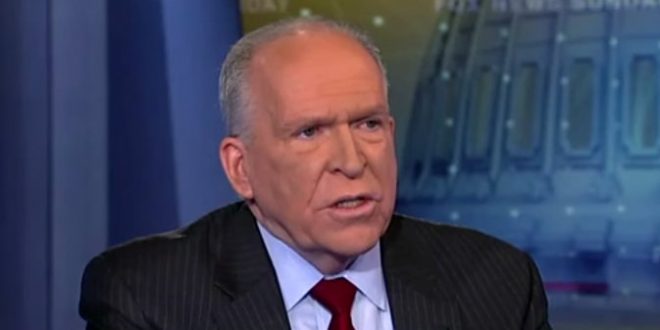 New York authorities are reporting that the suspicious package mailed to CNN’s offices at Manhattan’s Time Warner Center was addressed to former CIA director John Brennan, who has been a sharp critic of the Trump administration since becoming a CNN commentator. Story developing….

Brennan, an official in the Obama administration, is a frequent CNN guest and Trump critic whose security clearance was revoked by the President this summer. The device found in the 10 Columbus Circle mailroom is similar to the ones addressed to Hillary Clinton, Barack Obama, and George Soros, a law enforcement source says.

Another law enforcement official tells CNN’s Evan Perez that the initial examination of all of the devices shows them to be constructed similarly. At least one of the devices appeared to contain projectiles, including shards of glass. The devices are rudimentary but functional.

A representative for John Brennan says he is not commenting on the suspicious package that CNN reports was addressed to him.

Previous Junior On Bomb Attempts: “This Crap Has To Stop”
Next FLORIDA: Office Of House Rep. Debbie Wasserman Schultz Evacuated Due To Suspicious Package [VIDEO]