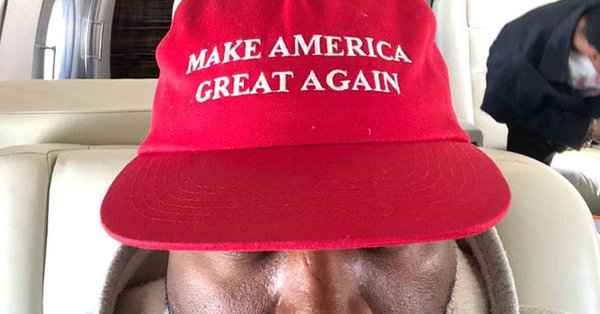 Kanye West has been having a very Kanye West 24 hours. He performed as a giant Perrier bottle on Saturday Night Live, then was cut off at the end of the show during an impromptu pro-Trump speech to awkward silence and a scattered mixture of boos and applause. Which President Trump praised on Twitter.

Head spinning yet? It doesn’t stop there. West posted a message and photo to his Twitter account Sunday afternoon seemingly calling for the abolition of the 13th Amendment to the Constitution of the United States.

About an hour later, he realized what he just tweeted and started to walk back on his comments. “The 13th Amendment is slavery in disguise meaning it never ended We are the solution that heals,” he clarified.

He continued saying that we need to “amend the 13th amendment. “We apply everyone’s opinions to our platform,” he added. It didn’t take too long for people to respond, obviously.

The 13th Amendment was proposed in part because of well-founded fears that the Supreme Court might nullify Abraham Lincoln’s Emancipation Proclamation. But the exception clause of the 13th Amendment was a “convenient sleight of hand,” said Dennis R. Childs, an associate professor at the University of California San Diego and author of “Slaves of the State: Black Incarceration from the Chain Gang to the Penitentiary.”

Prisoners have been protesting this clause for decades. In August, prisoners in 17 states launched a three-week strike to protest being forced to work for meager wages in contemptible conditions — all of which they traced to the 13th Amendment’s exception clause. Last year, advocates for prisoners launched a march on Washington in which they called for the “end to prison slavery.”

this represents good and America becoming whole again. We will no longer outsource to other countries. We build factories here in America and create jobs. We will provide jobs for all who are free from prisons as we abolish the 13th amendment. Message sent with love pic.twitter.com/a15WqI8zgu

not abolish but. let’s amend the 13th amendment

We apply everyone’s opinions to our platform

The 13th ammendment abolished slavery. Re-upping this from the last time: @ye is truly an idiot. Message sent with distaste for idiocy. https://t.co/d0BNi45Zm8