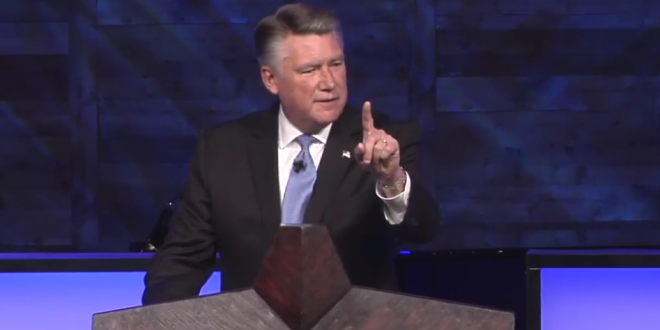 Karen Pence was seemingly brought in to help Harris deal with fallout from recent controversy over comments Harris had made about women, such as emphasizing Bible verses requiring women to submit to their husbands and questioning whether women having careers is “healthy” for society.

WFAE reported that “Pence came to Charlotte as the guest of the Women for Mark Harris Bus Tour,” which kicked off at the University of North Carolina’s Charlotte campus on Monday morning.

Harris was the leader of North Carolina’s successful 2012 ban on same-sex marriage and spearheaded the push for his state’s anti-LGBT HB2 bill.

He regularly declares that being gay is a choice and in the video below, you’ll see him lament that gays are no longer imprisoned.

Harris is also a member of the Family Research Council’s Watchmen On The Wall group of extremist pastors and regularly appears with North Carolina’s viciously anti-LGBT Benham brothers.