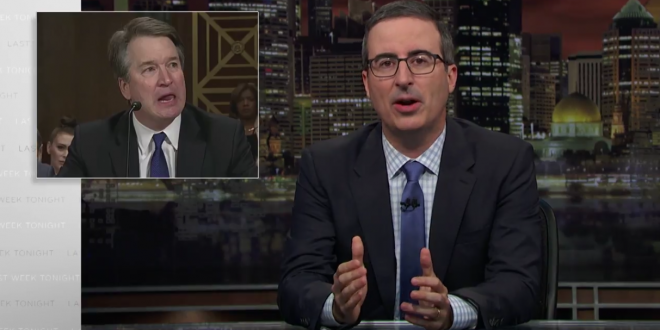 “We need to talk about Brett Kavanaugh, Supreme Court nominee and walking crushed beer can,” Oliver started. The HBO host took a look at Christine Blasey Ford‘s “brave and compelling” testimony, before moving on to Kavanaugh’s — which was, per Oliver, just “weird.”

“He’s crying at the memory of lifting weights at his friend Tobin’s house!” Oliver said. “I hate to say it, but I’m starting to think that men might be too emotional for the Supreme Court.”

Oliver argued that there were several “disqualifying” moments in Kavanaugh’s testimony—none more so than his allegation of a left-wing conspiracy that sounded “positively Trumpian.”

“Now, that is absolutely horrifying, and it is worth taking a moment now to note the norm that has just been shattered, because I know that we’re all basically callous to people talking that way now, but we are supposed to have at least nine people left in America who do not talk that way, and yet Kavanaugh just all but came out and said he’s going to approach his entire tenure as one case of Me vs. The Libtard Cucks,” said Oliver.

In another clip, Kavanaugh listed a group of females by first name with whom he was friends in high school. Quipped Oliver: “That’s not testimony though, is it? That’s a plaintiff’s spoken-word cover of ‘Mambo No. 5.'”

Oliver ended his show by passionately arguing that he can’t see a good reason for pushing Kavanaugh into the position, noting that any Republican pick will likely restrict abortion rights.

“You don’t need to choose an unhinged partisan with a multiple accusations of sexual misconduct hanging over him,” he said. “So it feels like they’re doing this, just to deliver a ‘fuck you’ to Democrats, and even more directly, a ‘fuck you’ to women.”