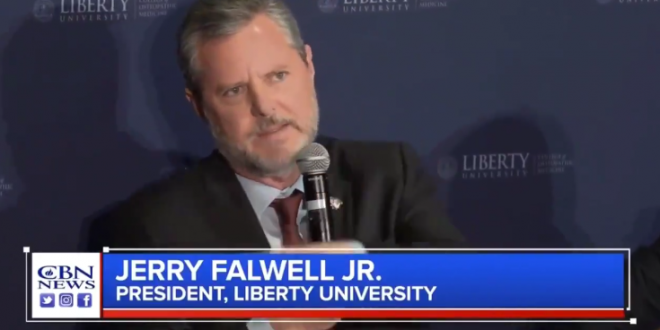 A cardiologist and medical engineer spoke at Liberty University College of Osteopathic Medicine on Wednesday about an innovative new procedure, revealing a surprise patient: Jerry Falwell Jr. Falwell, president of Liberty University, revealed Wednesday he was born with a hole in his heart that has caused decades of migraines and two mild strokes in 2016.

Last month, he had the hole closed through a new medical procedure that involved going through his groin and stitching the hole shut. Falwell said he learned about the procedure from Secretary of Housing and Urban Development Ben Carson, also a celebrated neurosurgeon, who spoke at the medical school’s first graduation in May.

As you’ll see in the clip below, Falwell says that when he told Trump about the procedure, Trump immediately demanded credit. Falwell agreed, saying, “This is my reward for supporting you.