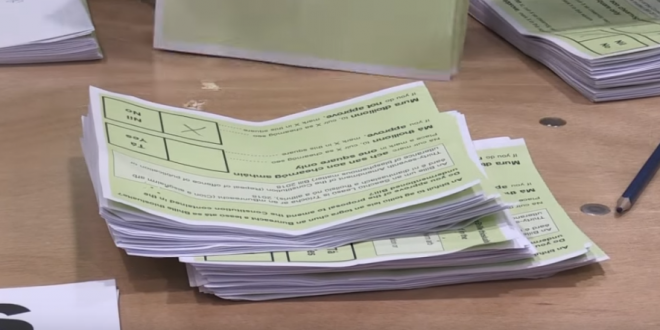 Campaigners in Ireland celebrated the end of a “medieval” ban on blasphemy on Saturday, after voters overwhelmingly backed removing the offence from the constitution in a referendum.

The referendum saw 64.85% vote yes to remove the prohibition on blasphemy, with 35.15% in favour of retaining it. A total of 951,650 people voted for the change, with 515,808 opposing the move. The decision on a turnout of 43.79%, was the latest reflection of seismic social and political changes in Ireland, which the taoiseach, Leo Varadkar, has described as a “quiet revolution”.

“It means that we’ve got rid of a medieval crime from our constitution that should never have been there,” said Michael Nugent, chairperson of Atheist Ireland, which had campaigned for years to have blasphemy taken out of the constitution.

The decision in a referendum on Friday is the latest signal reflecting the country’s weakening adherence to the Catholic Church, which had itself described the constitutional reference as “obsolete.”

Minister of Justice Charlie Flanagan said the outcome was “another reflection of the strong public support for a modern, liberal constitution.”

Many European countries retain provisions that allow for prosecution, and in some cases imprisonment, for blasphemy offenses. In recent years, prosecutions under blasphemy laws have been used in defense of Islam, as well as Christianity, although convictions are rare and they are increasingly seen as outdated and a limit to freedom of expression.

No one has ever been charged with the offence in the history of the Irish state, but it does carry a fine of up to €25,000.

The Fine Gael led-government supported a Yes vote, as did all major parties. While campaigning on Tuesday, Irish prime minister Leo Varadkar outlined his support for the reform.

“What we want to have in Ireland is a 21st Century constitution for a 21st Century republic,” he said. “We’ve already reformed our Constitution to allow for things like marriage equality, women’s right to choose.

The moment that the people of Ireland officially removed the crime of blasphemy from our constitution 🙂 #BlasphemyRef pic.twitter.com/UDm2gM2ViP

Congratulations to our friends in Ireland on this historic victory! https://t.co/58iG6aUzhV

Previous Eric Trump: The Shooter Doesn’t Represent The Right
Next Gab Begs Trump For Help As Big Tech Cracks Down