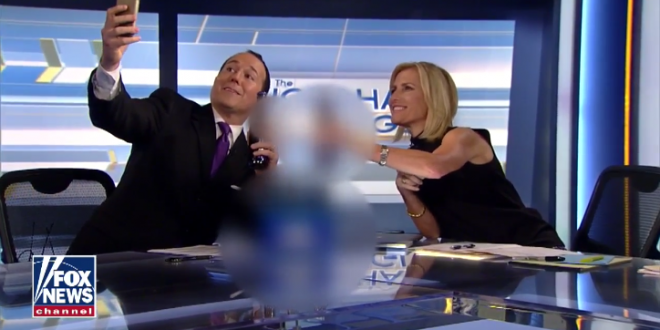 Ingraham Guest Falls Out Of Chair While Toasting Kavanaugh Vote With Beer, Claims It Was Intentional

A clip of a guest falling off his chair on Laura Ingraham’s show caught some social media users on Friday after it was tweeted without context.

In the previous segment, Arroyo had been talking about people who die while taking selfies in risky situations. That context was not included in the viral clip, making the incident appear unscripted.

So they were mocking people who died taking selfies and mocking Kavanaugh’s alleged victims? Fox News later blurred out the Bud Light.

HOLY SHIT this is incredible pic.twitter.com/ObGFl4mKeR

For all of you concerned viewers, @RaymondArroyo’s fall during our Kavanaugh-Toast selfie was a JOKE…a pratfall after a long week. #Laughter #selfiecide