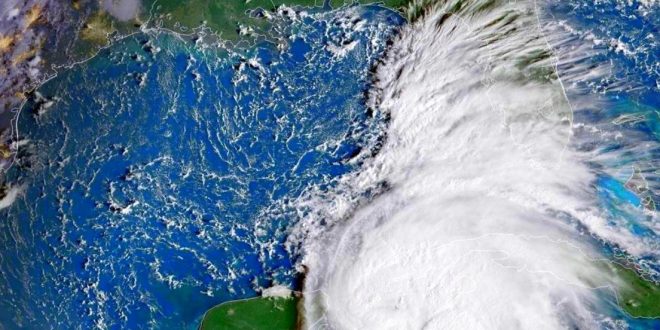 A tropical storm off Mexico’s Yucatan Peninsula has rapidly strengthened and could become a dangerous hurricane before an expected midweek strike on the Gulf Coast in the Florida Panhandle, forecasters said Monday.

The storm was expected to move into the Gulf of Mexico, where very warm water temperatures and favorable atmospheric conditions were expected to fuel its strength, Robbie Berg, a hurricane specialist at the Miami-based storm forecasting hub, wrote in an advisory.

A hurricane watch is now posted for the northeast Gulf Coast from the Alabama/Florida border to Suwanee River, Florida. This includes Pensacola, Panama City and Tallahassee. Hurricane watches are issued 48 hours before the arrival of tropical-storm-force winds, which is when outside preparations become dangerous.

Tropical storm watches are in effect from Suwanee River, Florida, to Anna Maria Island, Florida, including Tampa Bay. Also in a tropical storm watch is a swath from the Alabama/Florida border to the Mississippi/Alabama border as well as inland areas of southern Alabama and southwest Georgia.

Landfall is most likely to occur somewhere between the Florida Panhandle and the Big Bend of Florida Wednesday into Wednesday night. Depending on how quickly or slowly Michael begins to turn northeast, landfall could be delayed until early Thursday.

As Tropical Storm Michael approaches, I will be returning to Tallahassee to focus on preparing the City and residents for what may come. Everyone please stay safe, stay informed, and be prepared for these changing weather conditions.