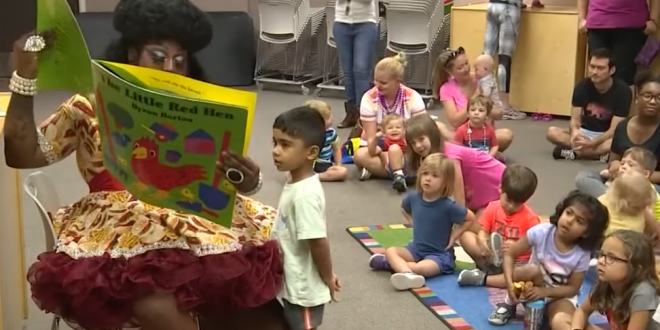 A federal judge in Houston swiftly ended a chapter Wednesday for a group of conservative Christian activists seeking to stop the Drag Queen Story Hour at a local public library.

The judge explained the four litigants applied for injunction to halt the story hour on the grounds that it violated the freedom or religion clause in the Constitution and said, “There is no basis to support the requested relief. The application is denied.”

James Woodfill, one the haters, is ever so upset.

“That’s outrageous that we’ve come to a point where we’re saying it’s OK for our taxpayer dollars to be used for a drag queen to come in and indoctrinate our young kids. These are kids that are 3 to 10 years of age,” he said. “Hundreds of thousands of pieces of mail are going out all over Harris County letting people know exactly what is happening with a Democrat-controlled government.”

But Mayor Turner points out that no tax dollars are being used on the program. “It is being housed at one or two libraries, requested by the patrons of those libraries. There are no city tax dollars. It’s a voluntary program. It’s not costing people anything,” Turner said. Woodfill says they have a $500,000 budget to spend on mailers and television ads which are intended to expose the activity that has parents divided.

Watch the video for a taste of their hate ads.

Previous REPORT: Mueller Is Closing In On Birther Jerome Corsi
Next Hunt For Serial Bomber Focuses On South Florida